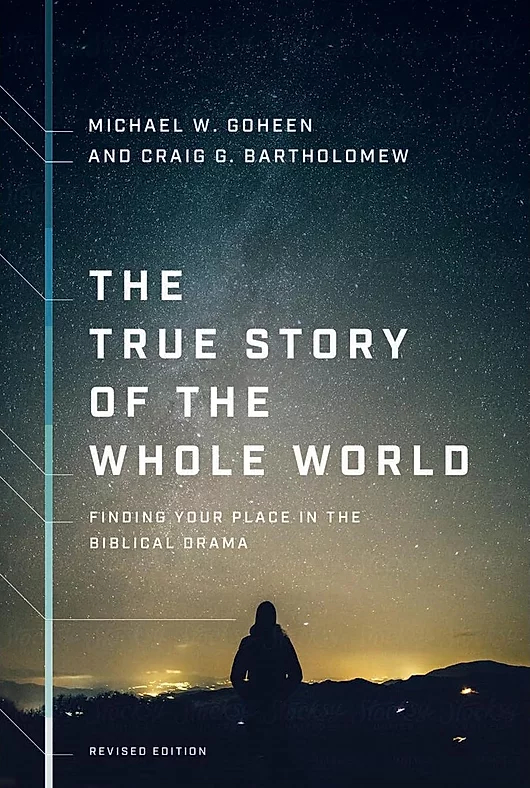 The True Story of the Whole World

Have you wondered how the Bible hangs together, or how to make sense of it all? The Bible isn’t a set of separate books: it’s a compelling drama that unfolds from beginning to end. This book unfolds Scripture in six “acts”—from the establishment of God’s kingdom to the “return of the King.” The authors clearly show God working in the world and in the lives of people to establish the great kingdom that has been God’s plan from the beginning. Learn how God’s story continues in our lives here and now, and how to discover our meaning and place in it. Great for seasoned Christians looking for a new way to read the Bible as well as for new believers who want to understand the Scriptures in a Reformed context. Discussion questions are included.

Scene 1: A People for the King
Scene 2: A Land and a King for God’s People

Interlude: A Kingdom Story Waiting for an Ending – The Intertestamental Period

Scene 1: From Jerusalem to Rome
Scene 2: And into All the World

Act 6: The Return of the King – Redemption Completed

A few years ago Bob Weber and Phil Kenyon issued a passionate and clarion call to the evangelical community. It was a summons to growing faithfulness to the gospel in the midst of huge threats. After affirming the authority of Scripture and noting the myriad of global challenges facing the evangelical church at the beginning of the 21st century, they say: “Today, as in the ancient era, the Church is confronted by a host of master narratives that contradict and compete with the gospel. The pressing question is: who gets to narrate the world?” They believe, and rightly so, that if the Christian church is to be faithful in the midst of competing stories, this question must be answered unequivocally in terms of the biblical narrative: The Bible tells the true story of the world. Thus their first section is entitled ‘On the Primacy of Biblical Narrative.’ Getting this straight is the crucial starting point. The following sections on the church, theology, worship, spiritual formation, and the believer’s life in the world are all tied to the biblical story. The church finds its identity in the role it plays in the biblical story; theology deepens our understanding of this story; worship enacts and tells this story; spiritual formation equips the church to embody this story; the believer’s life in the world, including all of public life, is a witness to the truth of this story.

Our passion is similar: it is that people learn to read the Bible as it was meant to be read—as the true story of the world. The True Story of the Whole World has been written to tell the biblical story of redemption as a unified, coherent narrative of God’s ongoing redemptive work in the world. After God had created the world, and after humanrebellion had corrupted it, God set out to restore what he had made: “While justly angry, God did not turn away from a world bent on destruction but turned to face it in love. With patience and tender care, the Lord set out on the long road of redemption to reclaim the lost as his people and the world as his kingdom.” The Bible narrates the story of God’s journey on that long road of restoration. It is a unified and progressively unfolding drama of God’s action in history for the salvation of the whole world. The Bible is not a mere jumble of history, poetry, lessons in morality and theology, comforting promises, guiding principles and commands; it is fundamentally coherent. Every part of the Bible–each event, book, character, command, prophecy, promise, and poem–must be understood in the context of the one storyline.

Many of us have read the Bible as if it were merely a mosaic of little bits—theological bits, moral bits, historical-critical bits, sermon bits, devotional bits. But to read the Bible in such a fragmented way is to ignore God’s intention to shape our lives through its story. All human communities live out of some story that provides a context for understanding the meaning of history that gives shape and direction to their lives. If we allow the Bible to become fragmented, it is in danger of being absorbed into whatever other story is shaping our culture, and will thus cease to shape our lives as it should. The dominant cultural story of the West is a secular, humanist story which has been twisted by idolatry. If as believers we allow this story (rather than the Bible) to become the real world in which we live, then our lives will be shaped not by the story of scripture, but the lies of an idolatrous culture. Thus the unity of Scripture is no minor matter: a fragmented Bible may produce theologically orthodox, morally upright, warmly pious idol worshippers!

If our lives are to be shaped by the story of Scripture, we will need to understand two things well: the compelling unity of the biblical story, and our place within that story. This book is our telling of that story. We invite the reader to make it their story, to find their place in it, and to indwell it as the true story of our world.

There are three important emphases in this book. First, we stress the comprehensive scope of God’s redemptive work: the biblical story does not move toward the destruction of the world and our individual “rescue” to heaven. It culminates in the restoration of the entire creation and all of human life to its original goodness. Secondly, we emphasize our place within the biblical story, that is, the era of biblical history in which we live. Some refer to four questions as foundational to a biblical worldview: “Who am I?” “Where am I?” “What’s wrong?” “What’s the solution?” N. T. Wright adds an important fifth question: “What time is it?”—that is, “Where do we belong in this story? How does it shape our lives in the present?” We will explore the biblical answers to these five questions as part of our telling of the grand story of the Bible. Thirdly, we highlight the centrality of mission within the biblical story. There is God’s mission: The Bible narrates God’s mission to restore the creation. Israel’s mission flows from this: God chose a people to again embody God’s creational purposes for humanity and so be a light to the nations, and the Old Testament narrates the history of Israel’s response to their divine calling. Jesus’ mission: When Jesus comes on the scene, he takes upon himself the missionary vocation which had been Israel’s. He embodies God’s purpose for humanity and accomplishes the victory over sin, opening the way to a new world. When his earthly ministry is over, he leaves his church with the mandate to continue in that same mission. And so the church’s mission: In our own time, standing as we do between Pentecost and the return of Jesus, our central task as the people of God is to witness to the rule of Jesus Christ over all of life.

We have also borrowed from N. T. Wright his very helpful metaphor of the Bible as a drama. But whereas Wright speaks of five acts—creation, sin, Israel, Christ, church—we tell the story in terms of six acts. Following Brian Walsh and Richard Middleton we add the coming of the new creation as the final act of the biblical drama. We have also added a prologue. This prologue addresses in a preliminary way what it means to say that human life is shaped by a story.

This is the third version of our book first published by Baker Academic Press (Grand Rapids, MI, 2004) and SPCK (London, UK, 2006). This Faith Alive version is slightly revised from the SPCK edition. The main title has been changed from ‘The Drama of Scripture’ to ‘The True Story of the World’, but the subtitle, ‘Finding Our Place in the Biblical Story’ has remained the same. This new title reflects what Michael Goheen would often tell his first year biblical theology students at the beginning of the semester: “This course is about the true story of the world.”

This edition is suitable as a study version for individuals and churches. Three things distinguish both the SPCK and Faith Alive editions from the original Baker publication. First the book has been significantly shortened. Many of the details in the earlier book have been eliminated. Second, almost all of the explanatory footnotes have been dropped. Third, each ‘act’ is followed by a section on the contemporary significance of that part of the story. These sections are intentionally brief and by no means exhaustive; rather they are meant to suggest how the acts may be read with integrity in terms of their significance for today. These sections are followed by some questions that can be used as discussion starters to reflect on the meaning of the story for our lives today.

There is a website that accompanies this book (www.missionworldview.com). It provides various resources that may help you to use this book: course syllabus, adult Bible study class schedules of various lengths, Power Point slides, more study questions, articles, links, and more.

We are deeply grateful that so many have found the Baker and SPCK versions of this book to be helpful; it has been used beyond our wildest expectations in many settings and in many countries. And it makes us even more grateful to those who contributed to the original project. They include Fred Hughes and Alan Dyer from Britain, Dawn Berkelaar, Gene Haas, and Al Wolters from Canada, Wayne Kobes from the United States, and Wayne Barkhuizen from South Africa. Jim Kinney from Baker Academic Publishing and Alison Barr from SPCK were very helpful and encouraging on the first two editions. And now we are grateful to Len Vander Zee from Faith Alive Publishing who has made this shorter, study edition available in North America. Undoubtedly, the one to whom we are most indebted is our friend Doug Loney, Dean of Arts and Humanities and Professor of English at Redeemer University College. Doug has given to the original manuscript and then to the SPCK volume much time and skill as a writer helping make it a lively and coherent text. His sterling work continues to be reflected in this new Faith Alive version.