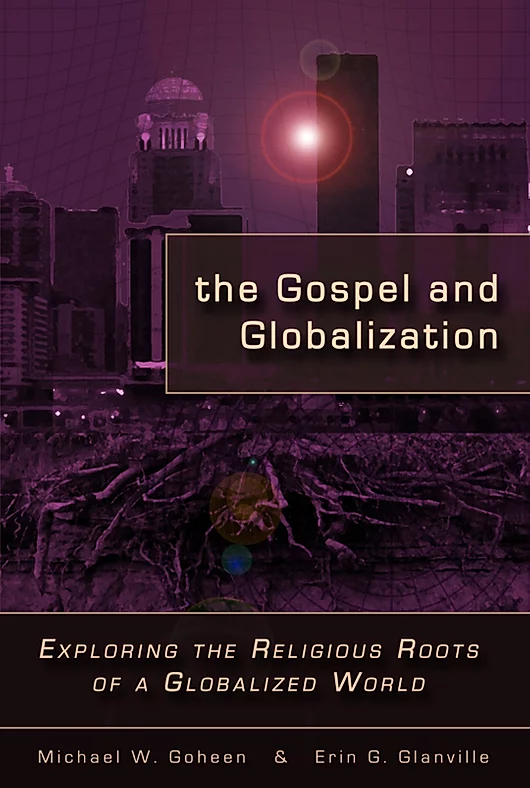 The Gospel and Globalization

In The Gospel and Globalization leading and emerging Christian scholars weigh in on the question of how Western Christians can formulate a faithful response to one of the most powerful currents of our day—globalization…. Together these articles demonstrate the importance of identifying and understanding the religious roots of globalization.

The Bible and Globalization

God, Globalization and Grace: An Exercise in Public Theology

Probing the Historical and Religious Roots of Economic Globalization

The Emperor’s (not-so) New Clothes: Postmodernity, Globalization and the “Triumph” of Modernity

Globalization, Economics, and the Modern Worldview

Globalization and the Logic of Capitalism

From Shock and Awe to Shock and Grace: A Response to Naomi Klein’s The Shock Doctrine

Commercial Entrepreneurship for the Good of People and Planet

The Challenge of Islam’s Critique of Technology

Islam and the USA: Contrasting Visions of the End of History

Climate Change and the Rapid Dynamic of Globalization

Creatures in a Small Place: Postcolonial Literature, Globalization, and Stories of Refugees

Cities As a Place for Public Artwork: A Glocal Approach

The World is Your Playground: Competing Stories of Gospel and Globalized Adventure

This book gathers together a number of essays that seek to uncover the foundational beliefs shaping globalization from the standpoint of the Christian gospel. As editors our interest in globalization does not originate from an expertise in the social sciences—economics, politics, international relations or the other disciplines in which globalization is a hot topic. Rather our concern with the issue comes because we see globalization as one of the most powerful religious forces in our world today. Mike’s area of expertise is worldview and mission studies; Erin’s is cultural studies. It is out of our investments in these disciplines that we are concerned to analyse globalization in terms of its dangers but also its opportunities for Christian communities to bear witness to the good news that Jesus Christ is Lord of history and that God is working in history to bring about his kingdom of shalom.

Robert Webber believes that “the most pressing spiritual issue of our time” is the question ‘who gets to narrate the world?’ Recognising that the Christian church at times has misused power to narrate the history of the world in directions that benefits itself, we humbly offer that the Bible, which reveals the mighty acts of God, climactically in Jesus Christ, and in and through the church is the true story of the world. Other powerful stories at work in our global world include the Islamic story of world history and the supposedly secular story of Western globalization. In a masterful concluding chapter of his book Bible and Mission Richard Bauckham describes the missionary encounter between the Bible, on the one hand, and globalization and consumerism, on the other, as the primary battle facing the church today. Both stories offer a metanarrative of history by which Bauckham means “an attempt to tell a single story about the whole of human history in order to attribute a single and integrated meaning to the whole.” As the church inhabits the biblical story it will find moments of consonance with but, also and necessarily, come into some conflict with the forces of globalization. The Enlightenment worldview-story, which has shaped the West for several centuries, is now one of the most powerful forces in our global world, and it carries with it both positive and negative potential. For Christians who want to be faithful in their calling to engage their culture and times with the gospel it is essential that they understand the foundational and religious dynamics of the metanarrative of globalization. Only then can the church embody and struggle for the shalom of the kingdom that will surely come for the whole globe at the end of history.

The Hebrew word shalom, often translated ‘peace’, is a word used by the Hebrew prophets to describe the world as it was meant to be. It is a life of justice and harmony in which humans and all of creation prosper. All human relationships—relationships with God, with each other, and with the non-human creation—are made right and become a flourishing, interrelated whole. Human rebellion at the beginning of human history shattered the harmony of God’s good creation, but the Bible tells the story of God’s work to restore that shalom. The church has been invited to participate in this story both to embody that coming peace and justice and to be an instrument of it. Since the story of Western globalization is powerful and offers potentials for fuller shalom but at the same time is responsible for destroying that shalom, the church must understand those dynamics to participate faithfully in its mission.

The essays gathered in this book come from two primary sources. Some of them were given as LambLight lectures4 that are offered each year on Trinity Western University’s campus. The LambLight lectures are lectures given by significant visiting scholars who treat a contemporary topic in a popular, relevant and informative way. A good number of these essays began their life as a LambLight lecture. Others were contributed in response to an invitation of the editors to enrich and widen the analyses offered by these lectures. As editors we are thankful for the overwhelmingly positive response we received from each of these authors to our request for an essay that would treat globalization from the standpoint of its underlying beliefs, and for the superb quality of the contributions. We would like to thank a number of people. Our life-partners, Marnie Goheen and Mark Glanville, were very encouraging throughout the process. The Geneva Board which oversees the chair that Mike occupies, and Pieter and Fran Vanderpol who fund that chair made this book possible by their support in a number of ways. Brittany Groen and Dan Postma offered their gifts in editing and typesetting respectively while Ben Goheen designed the cover for the book. Bill Reimer and Rob Clements from Regent Press, and Robin Parry from Paternoster, were helpful along the way in bringing this book to birth. Erin would also like to thank her colleagues at McMaster University, who inhabit a variety of stories and whose perspectives have given her broader insights into the undercurrents of globalization.

Our prayer is that this book would equip the church to be more faithful to the gospel as it lives in the midst of the powerful forces of globalization. If it succeeds in this it will be worth the many hours of work that has brought this book to light.

This important collection of essays has its origin in a series of invited lectures on the religious significance of globalization held at Trinity Western University in Vancouver, British Columbia. Thus, the reader might well expect in this volume, and actually does find, a range of evangelical perspectives on globalization, seasoned perhaps with a dose of brisk, Canadian common sense. The collection is remarkably innocent of the kind of enthusiasm with which some evangelicals in the United States embrace globalization as the providential vehicle for ushering in the kingdom of God—or if not the kingdom of God, at least the global expansion of personal freedom, democracy, and free-market capitalism. Although the essays are contributed by a wide range of Christian authors, appropriately selected from various disciplines, including but not restricted to theology and economics, they are arranged and edited in such a way as to form a single metanarrative.… Judging by the merits of this collection of essays, I would say that Canadian evangelicals are generally better prepared to ask and answer such questions than their coreligionists south of the border.