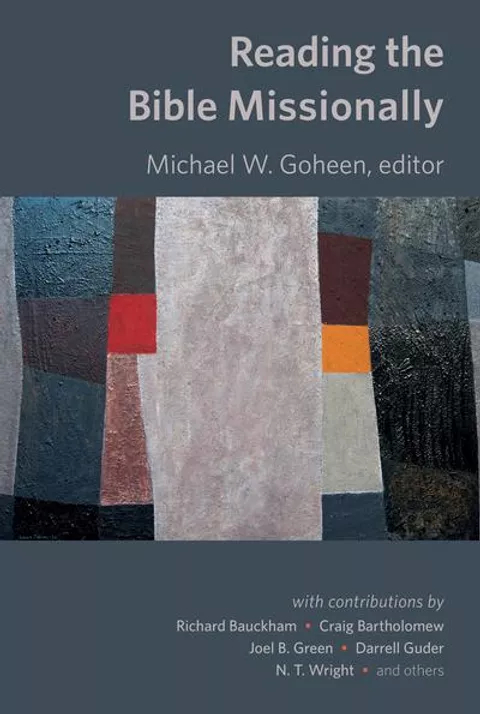 Series: The Gospel and Our Culture Series (GCOS) Insights from a noteworthy convergence of top scholars in biblical studies and missiology. Over the past half century, it has become clear that mission is a central theme in the Bible’s narrative and, moreover, is central to the very identity of the church. This book significantly widens and deepens the emerging conversation on missional hermeneutics.

Essays from top biblical and missiological scholars discuss reading the Scriptures missionally, using mission as a key interpretive lens. Five introductory chapters probe various elements of a missional hermeneutic, followed by sections on the Old and New Testaments that include chapters on two books from each to illustrate what a missional reading of them looks like. Essays in two concluding sections draw out the implications of a missional reading of Scripture for preaching and for theological education.

The term “missional” has become pervasive in North America, to the point where it is now being used to describe church, theology, hermeneutics, theological education—even motherhood. [1] We might be tempted to remark (as one British newspaper editor did, in reference to the word “postmodernism”): “The word has no meaning. Use it as often as possible.” It is true that a word can be used so much that it becomes emptied of meaning. But, on the other hand, that a term has
come to be adopted by so many people so quickly may also indicate that something important is being recovered from obscurity. I believe this to be the case with the term “missional.”

Darrell Guder offers a helpful perspective when he says that the term “missional” is a kind of scaffolding that holds up our ecclesiology, theology, interpretation of Scripture, and theological education. We would not need that scaffolding if those things were all shaped as they should be by the missio Dei and by a robust understanding of the church’s missional nature. Speaking of theology in particular, Guder says, “If mission were truly the mother of our theology, if our theological disciplines were intentionally conceived and developed as components of the formation of the church for its biblical vocation, we would never need to use the term ‘missional.’” [2] The trouble is, of course, that it is not so: we’ve lost much of the sense of connection between mission and theology. Our use of the word “missional” points us to something biblically significant that has been, if not lost completely, certainly long misplaced. Likewise, concerning biblical hermeneutics, Guder says that the “practice of hermeneutics should be missional by its very nature. But it clearly is not, and so we must speak of ‘missional hermeneutics,’ propping up the enterprise with this conceptual scaffolding.” [3] The problem is that our ecclesiology and theology developed at a time when mission was not a central concern, as Lesslie Newbigin comments: “The period in which our thinking about the Church received its main features was the period in which Christianity had practically ceased to be a missionary religion… the dimensions of the ends of the earth had ceased to exist as a practical reality in the minds of Christians.” [4] Similarly, David Bosch says of current theological curriculum: “A major problem is that the present division of theological subjects was canonized in a period when the church in Europe was completely introverted.” [5]

And so the word “missional” may be helpful as scaffolding, a reminder to us of a kind of biblical interpretation that views the participation of God’s people in his redemptive mission as a central theme in Scripture, a reminder of the true nature of the church as it exists for the sake of the world and of the kind of theology needed to equip the church for its vocation. Of course, scaffolding is a temporary structure that supports a building until it can stand on its own. It is to be hoped that someday our understanding of church, theology, scriptural interpretation, and
theological education will be so suffused with our sense of missional vocation that we no longer need the reminder of the term “missional.” Perhaps one day we may even be able to say, as Chris Wright does, that to speak of “missional church” or “missional hermeneutic” is like saying “female woman”—that’s the only kind there is! This book probes a missional hermeneutic. Its beginnings were in the conference “A Missional Reading of Scripture” hosted by Calvin Theological Seminary in Grand Rapids, Michigan, in November 2013. Four keynote addresses opened up the theme of a missional reading of Scripture and its implications for preaching and theological education: Christopher Wright spoke on a missional reading of the Old Testament, N. T. Wright spoke on the New Testament, Michael Goheen addressed the implications of a missional reading of Scripture for preaching, and Darrell Guder on its importance for theological education. Various workshops examined the significance of a missional hermeneutic for the ministry of the church, for preaching and for worship. Over seven hundred participants made the conference a significant and memorable event.

The keynote addresses and some of the workshops given at that conference have been reworked into chapters for this book. In addition, other scholars whose voices have been significant in this conversation were invited to contribute their own chapters. The book’s first section examines the general nature and meaning of a missional hermeneutic from a variety of angles. The next two sections wrestle with a missional reading of the Old and New Testaments respectively; in both sections, an opening chapter addresses the issue more generally and is then followed by two chapters that give a missional reading of specific books of the Bible. The last two sections investigate the significance of a missional reading of Scripture for preaching and for theological education.

I am grateful to all those who willingly contributed to this book. Also my thanks goes to Calvin Theological Seminary—especially Jul Medenblik and Carl Bosma, who envisioned and hosted this conference—and to the many cosponsors who also helped to see it through: Missional Training Center–Phoenix, Institute for Global Church Planting and Renewal, Christian Reformed Church Home Missions, Newbigin House of Studies, and the Gospel and Our Culture Network (GOCN). I am thankful also to Doug Loney for giving his excellent editing skills to the task of
making this a better book, and to Erin Glanville for hours of transcribing.

I dedicate this book to Norman Shepherd, my professor at Westminster Theological Seminary thirty-five years ago. His lectures had a profound impact on me in a variety of ways. In terms of the theme of this book, his understanding of the covenant was deeply formative for the way I would learn to read God’s word, and so for what would later develop into a missional reading of Scripture. Norman was a theological educator in the first stage of his professional career and a preacher in the second, and thus his career path reflects the concerns of this book. Norman was almost eighty when he attended the 2013 conference, and he still took time between sessions to interact with younger students, pastors, and scholars. In my experience it is rare to see an older scholar remain flexible and willing to hear the Word of God afresh in new contexts. It seems that with age one’s convictions and patterns of thinking often become hardened and stiff—very much like our bodies—and new ideas can be met with fear or suspicion. Old, familiar formulations, rather than the word of God, can become the basis on which we judge anything new to us. But it is not so with Norman! He continues to listen and reflect appreciatively on the importance of a missional reading of Scripture in our time. It has been a joy to interact with him on this topic. It is my prayer that this book may encourage others to continue in the path Norman Shepherd has walked so faithfully: listening again and again to the address of God in the Scriptures in new settings, and then letting it speak into the new currents of our contemporary context so that the church may be led more and more into a living and vibrant faith.

“Eerdmans Publishing has done the reader a favor by including a series of lectures given during the conference “A Missional Reading of Scripture” hosted by Calvin Theological Seminary in 2013. This subject has become immensely popular as evidenced by more than a decade spent on this topic at the Society of Biblical Literature. … These separate essays fit together well to promote a missional reading of Scripture. I highly recommend this book.”

“Beyond serving as an introduction to the field of missional hermeneutics, one will find in this book many thought-provoking issues raised for biblical and mission scholars; for pastors and preachers; for theological educators; and for simply Christians who seek to live out their calling in everyday life.”

“This volume is a rich resource for those concerned that the Bible be read and interpreted with a strong orientation to the needs and context of the church and world. It brings together contributions from many respected authors in the field.”

“Over the past few decades, this shift toward a missional hermeneutic has gained considerable momentum in missiological circles and, increasingly, in some corners of biblical and theological scholarship. This compilation of fifteen essays attends to the state of this recent theological trend. From a variety of angles, the essays seek to show how a missional hermeneutic provides a much needed and fruitful encounter with the biblical text.”

“This volume contains a series of excellent essays by well-known biblical and missiological scholars who discuss reading the scripture using mission as a key interpretive lens…. The book is a helpful contribution to the ongoing conversation in hermeneutics.”

“This is an important and challenging book of fifteen essays. It is one that requires careful reading, taking sufficient time to reflect on the implications of a missional reading of the Bible for biblical studies, preaching, and theological education…. Pastors, biblical scholars, preachers, theological educators, and all who see themselves as disciples of Jesus Christ should read and reflect on the material in this book.”

“[Reading the Bible Missionally] boasts a remarkable list of contributors…. This book is a great opportunity to reflect on where the discussion has come in the last few decades, and it is also not a bad starting place for those students who are just entering the discussion.”

“Some of the very best Biblical thinkers of our time weigh in on how to read the Bible in such a way as to be captured by its wholistic, life-changing and world-redeeming message…. Can mission and God’s cosmic redemption plan unleashed in the world in Christ be a helpful lens to help us understand the Bible properly and fruitfully? This book is amazing, smart, convicting… a fabulous, serious collection of essays…”